2019 was a very challenging year for me. In my estimation, it was probably the most challenging for me in ministry and personally.

Everything that could go wrong, almost did (I am very careful to say ‘almost’, because things could’ve always been much worse).

As I look back over my life, the end of a decade has typically been challenging for me. In early 1999, a relationship that meant very much to me officially ended. While it ended in 1998, I felt the effects of its dissolution; and trying to pick up the pieces the following year. To say it devastated my life would be an understatement. To this day, I know that it was only by God’s love, Grace and providence I made it through that.

In 2009, I was pastoring my first church. We were struggling to remain afloat. We went to a new location the previous year; and there was not a favorable response to the change. I couldn’t understand it, because it was the nicest building we’d ever worshipped in. Only years later did I realize some fundamental things that contributed to what I was experiencing, which I won’t share in this post. Added to the stress of a struggling church that couldn’t afford to support itself, let alone me and my family, I was completing my Master of Divinity degree in Biblical Languages at Southwestern Seminary. And if things could not get any worse, Dee and I had a miscarriage in May of that year, and another several months later.

Even years after, I can naturally see how those situations grew me; but still find it hard to see why God didn’t answer some of my prayers (keep me in that relationship or let me child/children live). I just know it shaped me into the man I am. However, I do live with scars; and I have a limp. 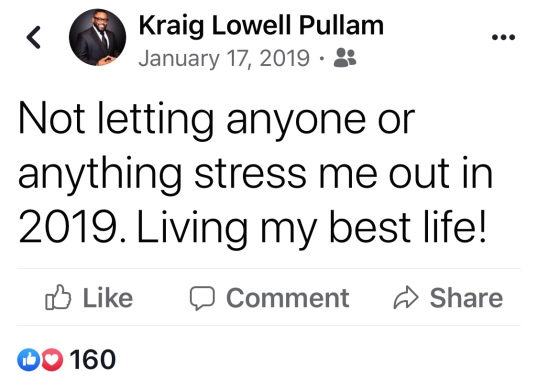 Someone said that if you want to make God laugh, tell Him your plans. Satan heard it; and God permitted him to use anything and anybody to stress me out, INCLUDING MYSELF. In fact, myself more than anyone else.

As a consequence, I became someone I did not know and did not like. Because of my youth in 1999, I learned how to not always lash out at those close to me as I did when I was only 19 (atleast the ones who weren’t lashing out at me), and because of everything that went on in 2009, I learned to suffer silently, put on my ministry face, be Pastoral, preach and do my job….

I allowed my perceptions of people’s issues to become personal for me. I allowed the problems and mistreatment of people I love and care about to stress me out, especially because I wanted to fix the situation. I even became stressed over loved ones and friends who felt I wasn’t giving them enough or calling them enough. I allowed other people’s fights (whether family or in church) to become my burden and problem. If a member left because of a divorce or conflict with someone else in our church, it hurt me and I took their leaving as personal. Even more…it causes me to see that I hadn’t fully confronted some of the truths and lessons God was trying to teach me in 1999 and 2009. Little did I know that my loss in 1999 and my challenges in 2009 were equipping me for the struggles I’d experience in 2019; that I may have 2020 Vision.

While I could make this post a Part 1 of a 3-part series, I’ll just express my few reflections here.

1) God has never promised that life or people or situations would come without friction.

2) God can handle people and things better than you.

3) Things and people will only have as much power as you give them.

3) Embrace the fact that many of the things, and people, that you are stressing about, probably aren’t stressing over you. These aren’t fabricationals.

5) Whether the problems or people are temporary or permanent, give it to God, show compassion, forgive yourself and then let if go.

6) Be thankful and grateful for the people, especially the God, you stress out continuously…who are patient, loving and present in your life.

This year…I will not abandon my intention. But I choose to believe I can determine its place in my life.

I pray for each person who is struggling today; and already stressed out in 2020. No matter what occurred yesterday, may you realize God’s overwhelming love for you; His purpose for your life; and use whatever energy for stress, toward fulfilling God’s promises in your life.

I hope to do that by sharing my story in the blog. Please subscribe and also share. Also…I would love to hear from you in the comments. Blessings!