What We Can Learn From Lamar Odom Ordeal 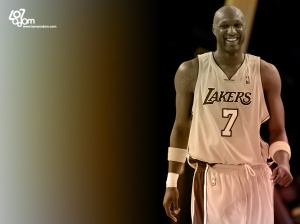 There.
I said it!
I can’t really say how I became a fan, considering there’s no one in my immediate family or friendship circle growing up who liked the Laker franchise. Nevertheless, I like them!
One of my favorite Lakers is Lamar Odom. Yes…I said that too!

On October 13, 2015, Odom was hospitalized after being discovered unconscious at the Love Ranch, a brothel in Crystal, Nevada. Those who are real fans, not only follow members of their team while they play, but after they have departed. And, those who are Christians, even pray for these current and former members of their respective teams. I’m no exception. It is alleged that Lamar Odom has struggled with substance abuse for the past few years. As a result, many have ascribed the constant turmoil in his life, in recent years, to many of the personal struggles he has with drugs. An abrupt marriage (marrying Khloe Kardashian after a month of dating), being traded from the Lakers to the Dallas Mavericks and then by to the Los Angeles Clippers, the list goes on and on, those who already didn’t know him coming to know him through a popular reality show; in a very public divorce; losing his best friend a few months ago; the list goes on and on.
One thing I think is certain – Lamar Odom needed help!

It leads me to make a few observations and/or ask a couple of questions.
1. Where are the roots?
2. Why are many Christians quick to believe we will not deal with our daddy’s demons or our mother’s mess?
3. Why do some manage life’s adversities better/worse than others?
4. Lamar Odom has always seemed to be a very nice/respectable/decent young man. But nice people are still human; and we must realize that we all have some things with which we wrestle and must work to overcome.
5. Can you help someone that doesn’t want help, feels they don’t have a problem or will not listen?

Because I am a Pastor and a minister, I cannot help but see how the aforementioned apply to not only our families and those in our friendship circle, but also within the Christian church. Acts 6 is the perfect example of leadership coming to grips with everyday human issues and struggles within the church. We are a spiritual entity; but we are also physically human. Any casual study of the Corinthian church would result in the obvious analysis that we can be gifted and struggle with human issues.
I am convinced that Jesus specialized in the study of human psychology and human behavior. And if the church is going to ministry effectively to those who are struggling with addictions, issues regarding their sexuality, family frictions, relational issues, etcetera, then the church must, by and large, bridge the gap that exists between what we proclaim on Sunday and how we manage life Monday through Saturday night.
Christian leaders commit suicide.
Deacons struggle with insecurity.
Choir members lie.
Trustees steal.

Are these just simply to be thrown to the logic of “we all have something we have to live with”? When do we decipher what is our “thorn” and what needs to be identified, confronted, biblically handled, prayerfully removed or corrected and the person changed?

Whenever there’s a “thorn” or habit that causes me to keep telling God, “I’m sorry”, it is probably a clear indication that there is something that needs to be crucified and not resurrected again. There are many things we are trying to resurrect that God wants to die in us. In like manner, there are many things that we are trying to kill, that God wants to live. Unfortunately, when there is unconfessed sin, it can be difficult to decipher between the two (Reference James 4:3; 2 Corinthians 13:5; 1 John 2:3–6; 3:7–10). I think that a strong, biblical congregation moves toward a biblical understanding and practice of Eldership; and also a strong, unwavering and biblical stance on church discipline.
As I pray for Lamar Odom to have a complete turnaround in his life, marriage and career (with his influence, there is life beyond playing basketball on the court… that at 35 years of age, he would see this as an opportunity to turn a minus into a PLUS. Because, after all….after being in a coma; reports that he would be a vegetable, etcetera…he has now awakened, off of life-support and is now walking and has been moved from the ICU in a Las Vegas Hospital to rehabilitation in Los Angeles, California.
May those of us who are apart of Christ’s church specialized in taking those who’ve been in a spiritual coma because of failures and setbacks, and nurse them back to spiritual health, victory and restoration.

3 thoughts on “What We Can Learn From Lamar Odom Ordeal”

Brandon Mouton - Dynamic Marketer
Stepping Out Of The Fog