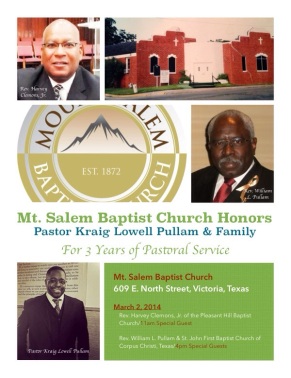 This Sunday marks three years of pastoral service for me at the Mt. Salem Baptist Church of Victoria.  These few years have been a great time of growth, development, intensified joy, healing, maturity and clarity of my call.

When coming to Mt. Salem, I was in a strange place in ministry and in life.  The church I had founded in Pearland (Cornerstone Church) was fledgling with gradual growth.  Starting in 2005, my Cornerstone congregation, in mid-fall of 2010, made the decision to move our primary service to Saturday afternoons.  Looking back, this should have been more of a time of 1) prayerful searching and divine direction rather than a quest to be creative or relevant in a Houston suburb and 2) I should not have asked for a vote; but as the Founding Pastor, I should have made the decision (as was my instinct) to hold the course.

Needless to say, our beloved congregation made the decision to move to Saturdays beginning in November of 2010.  Within a few weeks, I was asked to preach for a congregation that 1) was a congregation in the association where my father serves as Moderator and 2) a congregation I had recommended they extend a call to one of my friends.  The minister in charge asked if I would be a candidate, to which I respectfully declined.  I had no intentions of either leaving my congregation and certainly no plans of pastoring there, to be honest.  The minister said, will I come and just preach.  I informed him that my plan was to be out of my own pulpit the weekend following Thanksgiving, and that would be the only time I could even consider coming.  To make a very long story very short, I preached that Sunday.  In a shear attempt to convey I had no intentions, to myself and I guess to God, that I would not be going there, I suppose I did at least two things to prove my own point.  For one, I didn’t bring my family!  My wife wanted to travel with me; and the boys would’ve loved the journey.  But I asked her and them to stay behind…so that no one would get any ideas.  Also, I preached a sermon out of Philippians 1:12-19 entitled, ‘Knocked Down but not Knocked Out!’  This congregation had been through quite a big storm, were shocked by it’s devastating effects, and it was very public and embarrassing, to say the least.  I was simply there (so I THOUGHT!) to give them a ‘pep talk’ – to let them know they could ‘fall forward’ and use the experience (without going into details regarding their experience) to their advantage, as Paul, to further the gospel.  Unfortunately….God moved and smiled on the message!  I was asked to come back in late December, as I recall; and then asked to serve as Pastor in January of 2011.  Both congregations knew that I would continue to serve both congregations (as crazy as that sounds).  After all, I would be doing a service at Cornerstone on Saturday, and at Mt. Salem on Sundays.

First, I am unfortunately, very focused and loyal.  Therefore, it became a challenge for me to divide my time and stretch to the level of leading two different congregations.  While some Pastors do it, I felt like I was cheating on one for the other.  Second, we were discovering the ‘Saturday thing’, even prior to my being called to Mt. Salem, just wasn’t going to work; especially as the primary worship experience.

Maybe you can see my new dilemma and ordeal.  I am now at a new congregation with whom I’ve made a commitment, preparing for an installation.  This new congregation has already been scathed by leadership.  On the other end of the spectrum, I have my ‘baby’ whom I love; and it has proved more effective to move back to Sundays.  Yes….hindsight says, ‘Well, why did you even say yes to the new church?  Didn’t you think you all would go back to Sundays, at some point?’  Yes, in hindsight….

What in the WORLD am I about to do?  It was one of the most difficult and trying times in my life.  But I knew, in my instinct, what I was going to do: I’M LEAVING MT. SALEM.  I had a letter written out to send to the oldest deacon in the church.  It was a letter addressed to him, Cephus Clifton, to inform him that I had a change of heart; and I would not be able to continue as Pastor-elect.  But….I never sent the letter.  For one, God never told me to send the letter.  And I couldn’t put on God that was a mere instinct driven by my own proclivities and desires.  In addition, I somehow felt in my heart that I couldn’t abandon the people of Mt. Salem.  So I prayed; and did what I felt was the right thing to do.  I prepared to transition our congregation with a new leader, who happened to be one of our associate ministers; and that I would attempt to teach to them during midweek services.

But many things, I reflect, made this move ineffectual.  First, for years, the people heard MY vision.  Even the man I was attempting to move to my role was adamant about my remaining there.  Another thing is that those who had bought into the vision, those whom I had baptized, wed, trained, etc. began to feel abandoned by their leader.  But I was resolute in keeping my word to the people of Mt. Salem and Victoria, at that point.  Eventually, after about a year, Cornerstone disbanded.  Even now, it hurts to even write that.

My wife and I have miscarried twice.  And I can say with all my being that hearing of Cornerstone shutting it’s doors felt the same and probably worse.  It hurt; and still hurts!

That being said, I am somehow convinced that God led Mt. Salem and I together as Pastor and People.  I lost my ‘baby’, but God has given me a ‘family’ in the people of Mt. Salem.  Sometimes I have gotten frustrated….there are so many differences between pastoring a church your founded and a congregation that is 140 plus years of age.

But amid all of the challenges, there have been some tremendous rewards.  I’ll never adequately describe the sorrows I’ve felt with my loss (especially as it happened the way I’ve described), but I will also never adequately explain the unusual joy and peace I’ve enjoyed in this new field.

I have no idea how God will continue to unfold either my story or the story of the great congregation of Mt. Salem, but I am committed to this work; and I will continue until God says, ‘Well done!’

3 thoughts on “Three Years, and counting….”

Brandon Mouton - Dynamic Marketer
Stepping Out Of The Fog